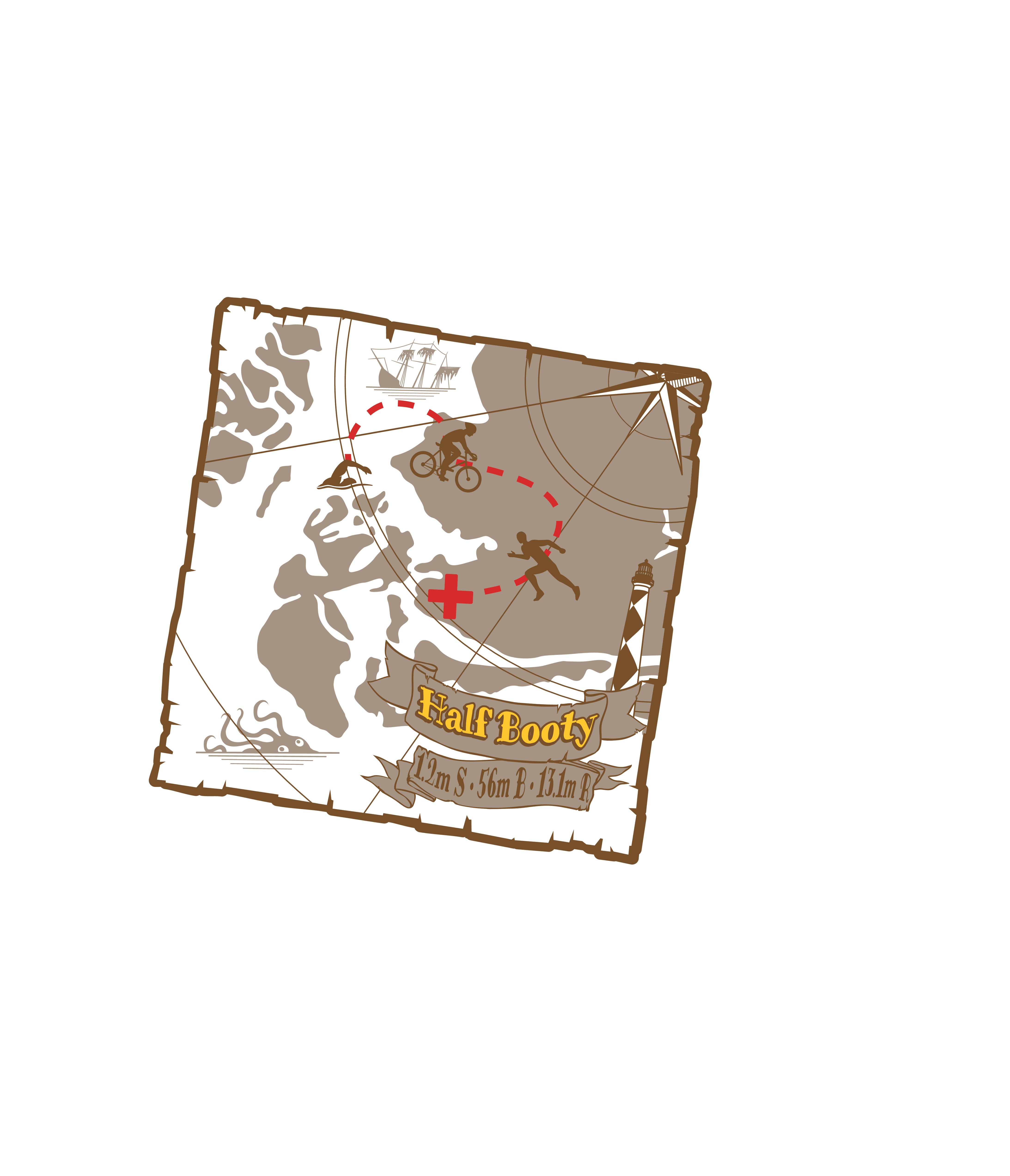 Located on the beautiful coast of North Carolina, participants and spectators can enjoy all the Crystal Coast area has to offer!  With average air temperatures in Beaufort between 60 and 75 degrees fahrenheit, May is the perfect time to visit!

The Crystal Coast community is excited and supportive about this event!  We encourage everyone to come experience this event and see all that Beaufort has to offer!

The Swim
The swim takes place in Gallants Channel off the western side of Beaufort.  The protected area provides a salt water swim without the strong ocean current.  The surface sea water temperature averages 72.1 degrees on event day with the average temperature range between 68.7 and 75.5.

Against a backdrop of the Town Creek Marina and docked ocean pleasure boats, swimmers will enjoy the calm open swim on the long rectangular course with nearly 1/2 mile northwest in the starting direction and 1/2 mile return.   Full booty participants will complete the swim course twice for the 2.4 mile distance.


The early starters on the swim course will be swimming against a very slight current on the initial portion of the swim course as they move in a northwest direction up the channel but will have the advantage of swimming with the current once they make the turn and return towards the swim finish.  Later starters will be aware of even less current since the current force will be waning to zero at 9:10 am.

Here are the tides forecast for the day of the event:  PERFECT for a 7 am start!!


Spectators are invited to line up along the new Gallants Channel Bridge to watch their triathlete from above.

The Bike
The bike route allows cyclists to venture out of Beaufort and into the small towns that neighbor the Crystal Coast including Morehead City, Newport, and Havelock.

Cyclists are sure to achieve a PR on this fast, flat course!  The only significant elevation changes are man-made as cyclists cross three bridges over channels and the Atlantic Intracoastal Waterway.

Cyclists will encounter the first "hill" almost immediately after exiting the transition area to give them a chance for a quick warm-up as their swim legs transition to cycling.  Spectators will line the Gallants Channel Bridge and offer encouragement and support as the  cyclists climb out of Beaufort.  The reward of the downhilll comes quickly as the cyclists leave the excitement of the start area behind them, exit Beaufort and look to the long, pleasant ride ahead.

The Run
Upon the return from the bike, runners will enjoy the opportunity to cross UNDER the Gallants Channel Bridge and approach the beautiful boat docks flanking Town Creek Marina.  They will quickly be on their way into downtown Beaufort where they will enjoy the many historical homes on the first part of the run course.  Spectators will line the streets and balconies along this cozy downtown area.

As runners approach the waterfront, they will be exhilarated by the pleasant water view that includes more watercrafts docked nearby.  A quick jaunt back through the historical downtown will take the runners to the charming Beaufort waterfront where the impressive homes and views across the channel to Carrot Island will relax and uplift every athlete!

The run course continues through residential Beaufort allowing participants to get a sense of real small town life along the welcoming coast of NC!  There will be plenty of room for spectators to gather and get multiple opportunities to cheer their loved ones.

The run brings participants back through the waterfront area for a finish on Middle Lane in downtown Beaufort.

The Transition Area
The transition area could not be more perfect for this spectacular event!  The huge open space along Gallants Channel with large grass area is protected from the high traffic of the downtown Beaufort area but provides easy access to the cycling route and the run course.

The Crystal Coast
Make it a weekend or week-long vacation with family and friends and include time to experience all the Crystal Coast has to offer!  In addition to being a dream location for history buffs (including those enthralled with pirate lore!), the Crystal Coast offers beaches, scuba diving, kayaking, hiking, fishing, boating, shopping, breweries, restaurants, and a perfect chance to escape the hustle of life to the calm, charming Crystal Coast!  Learn more about visiting the Crystal Coast here.

FS Series is co-owned by Jason Biggs, Brent Dorenkamp, and Marc Primanti. They time and direct over 75 running, swimming, triathlon, & duathlon events throughout North Carolina.  Since 2006 FS Series has been a key player in the growth and development of the triathlon market. In their 12+ years producing events they have been selected by USA Triathlon, the governing body of all triathlon and duathlon events, to host National Championship races at their races.  FS Series provides a personal, yet professional, feel to their events. Their partnerships with city officials and law enforcement creates a safe environment for the runners and race crew.

Kazem is Owner and President of Auto Dealers Investments Inc. Since 2001, Kazem has made a successful transition from the corporate high-tech world to running his own finance company.

He was president of Raleigh’s Wakefield High School Wolverine Athletic Booster Club and coach for the school’s cross country team. He founded the City of Oaks Marathon, the Tobacco Road Marathon, and the Wakefield High School Just Think First 5K supporting a program to educate students about the dangers of Drinking & Driving. Kazem has a true passion for running. Diagnosed with coronary artery disease in 2002, he started running to lose weight and improve his health. Within four months, he ran his first marathon at Myrtle Beach and, has run the Boston Marathon 11 times.

Cid has been a lifelong athlete starting with age group swimming and cycling through college. After college he found the world of triathlon and endurance cycling. He has completed 20+ Ironman races many of which have qualified him for a slot at Ironman Hawaii. Cid has multiple podium finishes at triathlons throughout the state. Through his store, Inside Out Sports, he has nurtured generations of runers and triathletes. They have been a sponsor of countless local races, race teams, as well as creating their own race series.

Steve Tulevech has been an owner/operator of Town Creek Marina in Beaufort, North Carolina since 1996. In charge of overseeing the full-service, family-owned marina as well as the service and repair of all boats, Steve’s hands-on approach and attention to detail guarantees a quality experience and customer satisfaction. Steve holds a Bachelor of Science degree in Biology from Union College and a Master of Science degree in Fisheries Science from the University of Rhode Island. A United States Coast Guard licensed captain since 1984, Steve is also an avid runner, skier and fisherman. He lives in Morehead City, North Carolina with his wife, Carol, and their two children, Steven Jr. and Grace.

David Motley
David was born in Winston Salem, NC and received his Masters in Engineering from NC State in 2002. He has been employed as an Aerospace Engineer in Eastern NC since 2002. David enjoys competing in triathlons as well as all distances of biking and running events. He completed the Raleigh 70.3 in 2016 and is currently training for the 200- mile Bourbon Chase relay. David is married with 2 children and enjoys playing and coaching his son and daughter in their various sports.

Art Parrish
Art is an NC native. He completed his B.S. of Industrial Engineering from NC State in 2004. In 2010, Art joined BSH (Bosch) Home Appliance in New Bern where he is currently a Project Manager leading new product development in the Dish Care Division. Art currently lives in Newport, NC with his wife and 3 boys. In his spare time, he enjoys all the Crystal Coast has to offer including boating, fishing, and spending time with family and friends at the beach. Art enjoys staying active and motivated by participating in mud runs and cycling events with friends and coworkers.

Joshua is an avid multi-sport athlete, participating in a variety of fitness events including a relay across the English Channel with his alumni from Physical Therapy school, multiple full and half distance triathlons and marathons. He is active in the Crystal Coast community, serving as the Director of Tri for Fun triathlon and President of Iron Coast Racing triathlon team. Joshua also enjoys fishing, camping, and hiking with his wife and daughter during his leisure time.

Carol manages the Ship’s Store, marketing, and human resources at Town Creek Marina, a family-owned and operated business in Beaufort, NC, as well as supporting all areas of the business. A former volleyball player, Carol has helped coach various club volleyball teams and run numerous 5K and 10K road races. She recently completed her first half marathon and is currently training for her second. In addition to running, Carol also enjoys hiking, skiing, fishing, and the Crystal Coast beaches. She and her husband, Steve, have two children and live in Morehead City, NC.

Lise has lived in North Carolina most of her life and is an avid outdoor enthusiast, enjoying road and mountain biking, hiking, camping, scuba diving, all watersports and snow skiing.  She has a bachelors from UNC-CH and a master’s degree from ECU and has been the account manager at Carteret Children’s Clinic since moving to the area in 1995.  She raised her two children in Beaufort, NC and now lives in Pine Knoll Shores where she is a volunteer with the NC Sea Turtle Program.  Her participation in triathlons began just 12 years ago, but she’s been bitten by the bug!  She is thrilled to be a grandmother with her granddaughter born in Italy this summer.  Needless to say, travel is a passion as well.