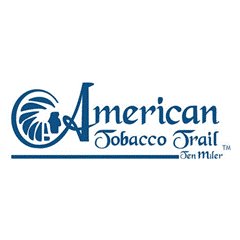 Welcome to the 16th running of the American Tobacco Trail 10-Miler!  In 2007, the North Carolina Roadrunners Club started a new 10-mile race along the emerging American Tobacco Trail, a lovely rails-to-trails facility that now runs all the way from Durham to New Hill.  That first race was quickly filled by 200 runners, showing that the new trail could handle running events, and giving NCRC the impetus to keep developing and expanding the race.  Over the last sixteen years, the number of runners has more than doubled, the trail has gotten additional access points and parking, and the American Tobacco Trail 10-Miler has matured into one of the area's best fall races.

The American Tobacco Trail 10 Miler was created in 2007 to raise awareness of and support for the growing trail system throughout the Triangle and to try to have a minimal impact on the environment. It has been designated as the RRCA North Carolina State Championship 10 Mile Event each year from 2008 to 2016, in 2017 and 2022 as the RRCA Southern Region 10-Mile Championship, and again as the state championship in 2018, 2019 and 2021.

Held in the early fall, the race is a perfect distance for those tapering for a fall marathon or those trying out a new race distance. Proceeds from these races will help American Tobacco Trail development and maintenance through Triangle Rails to Trails Conservancy. Do not miss this rare opportunity to race on one of the finest, most beautiful courses in the Triangle!

In 2018, the race introduced a 4-mile event that is more accessible to runners in the area who prefer shorter distances.  The 4-mile race begins ten minutes after the second wave of the 10-miler starts and proceeds along the same course, turning around at the 2-mile mark just south of Wimberly Drive.

Shirts for the 2023 races will be long-sleeved tech shirts; use your previous experience with tech shirts to estimate which size is appropriate for you.

There are separate 10-miler starting times for women and men in order to manage the size of the clusters of runners on the trail.  The women start at 8:50 am, while the men’s race kicks off at 8:58 am.  The 4-mile race will begin at 9:10 a.m.  The 8-minute stagger between the women's and men's starts is part of a "chase" competition, where the women get a head start, the men follow, and the first overall finisher gets a cash prize.

Both the start and the finish lines are on the trail at the White Oak Church Road trailhead parking lot.  Here is the course map.  The race starts at the 16.75-mile marker just off the White Oak Church Road trailhead, proceeds south five miles, turns around at the 21.75-mile marker, and returns north to finish at the same point as the starting line.  Aid stations with water, Gatorade Endurance Formula (the official endurance sports drink of the ATT-10), and porta-johns will be at the crossing of Wimberly Road and Olive Chapel Road.

Packet Pickup info:  Early packet pickup will be Friday, October 27 at Inside-Out Sports in Cary from 1pm to 7pm..  If you need someone to pick up your packet for you, please give them a photo of your drivers license so that we can know you're working together rather than someone just knowing your name.  If you can't pick up your stuff on Friday, please plan on being at race headquarters early on Saturday morning so that you can get your shirt, bib, and chip before the race begins.  Because of the rural nature of the race, please allow yourself some extra time to get to race headquarters.