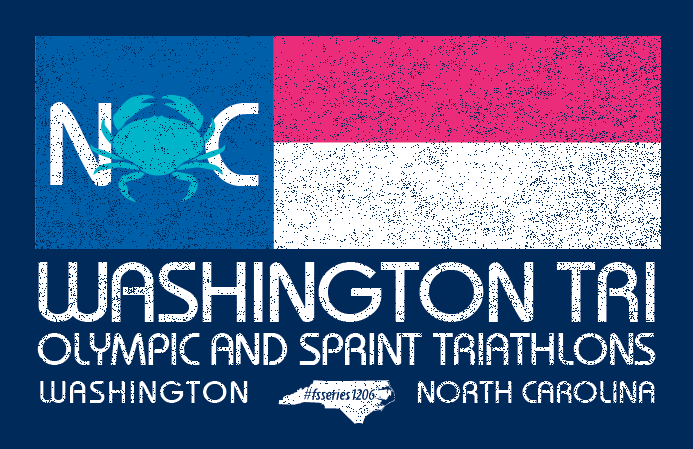 Welcome to Washington, NC usually referred to as Little Washington by folks down east! Washington's rich history adds to the character of the community. The settlement of Washington was laid out in 1775 on the northern bank of the Pamlico/Tar River by Colonel James Bonner and named in honor of General George Washington, his commander-in-chief. The City was incorporated by an act of the North Carolina General Assembly in 1782. It became the county seat of Beaufort County in 1785, an honor previously held by the Town of Bath, North Carolina's oldest town, located 15 miles east.

The triangular clockwise swim will be in the Pamlico River, a river off the Pamlico Sound.  The swim is slightly salty and has a little current.  The swim exits onto a sandy beach that is less than 25 yards from transition area.

The 25 (Olympic) and 12.5 (Sprint) miles bike courses are completely flat loop courses starting in Washington Park then riding down River Road before a short loop around McCotters Marina Road. .  The Olympic Bike Course is 2 loops of the Sprint Course. Water bottle handoff is located at the start of 2nd lap of Olympic bike course.  The bike courses have smooth surface.You should be able to PR these bike courses!

Washington Triathlon is a USA Triathlon sanctioned event.  USA Triathlon is proud to serve as the National Governing Body for triathlon, as well as duathlon, aquathlon, aquabike, winter triathlon, off-road triathlon and paratriathlon in the United States. Founded in 1982, USA Triathlon sanctions more than 4,300 races and connects with nearly 500,000 members each year, making it the largest multisport organization in the world. In addition to its work with athletes, coaches and race directors on the grassroots level, USA Triathlon provides leadership and support to elite athletes competing at international events, including International Triathlon Union (ITU) World Championships, Pan American Games and the Olympic and Paralympic Games. USA Triathlon is a proud member of the ITU and the United States Olympic Committee (USOC).