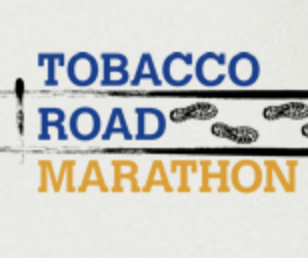 The Tobacco Road Half and Full Marathon Course:

TheTobacco Road Marathon will be the first of its kind in NC to embrace the town of Cary and country roads of Western Wake County. The marathon features over 20 miles of the American Tobacco Trail. The rest of the course is be flat and fast with a downhill finish and a must do for the Boston Qualifier!

Both races will begin at 7am on Brooks Park Lane and head towards the entrance of Thomas Brooks Park, as in prior years. At Green Level Church Road, runners make a right and follow Green Level Church Road past Green Hope School Road to Morrisville Parkway. At Morrisville Parkway, runners make a left and proceed for a little over 1 mile to the American Tobacco Trail (ATT).

Half Marathon Runners have a simple out-and-back course.  From Morrisville Parkway runners make a left on the ATT and go south to a u-turn point just past the Highway 64 under path.

The American Tobacco Trail is a recreational rail-trail located on an abandoned railroad corridor of the Norfolk Southern Railroad. Constructed in 1906, the original railroad traveled from Duncan to Durham near the New Hope River, transporting tobacco leaf from farming communities in Wake, Chatham and Durham counties for processing at the American Tobacco Company in Durham.

Construction of Jordan Lake in 1971 necessitated moving a section of the railroad corridor (from Bonsal to southern Durham County) several miles eastward, onto higher ground. Railroad traffic decreased after this time due to competition from interstate trucking. One of the last major uses of the railroad was to haul materials for the construction of the Shearon Harris Nuclear Power Plant near New Hill. With the railroad no longer in use, the tracks were removed in 1987

Local residents began using the rail corridor as an informal recreational trail, and in 1989, a group of citizens organized the nonprofit Triangle Rails To Trails Conservancy to promote the development of the corridor into a managed rail-trail. The N.C. Department of Transportation purchased the corridor from the railroad company in 1995 and subsequently leased the corridor to the counties to be developed and operated as a recreational trail open to the public.

It was officially named the American Tobacco Trail to reflect its historical roots, and planning and construction of the trail began. The trail is being built in sections, the first of which opened in 2001 in downtown Durham. Wake County opened its first, 3.75-mile section, from New Hill-Olive Chapel Road to Wimberly Road, in 2003. Wake County opened Phase II of the American Tobacco Trail in July 2005, extending the length from 3.75 miles to 5.5 miles. In 2006, the remaining one-mile section in Wake County was completed to fully extend Wake County's portion of the trail to 6.5 miles. Additionally, Wake County added a trailhead that accommodates 45 vehicle and 10 horse trailer spaces. Two restroom facilities were added to New Hill and White Oak trailheads.